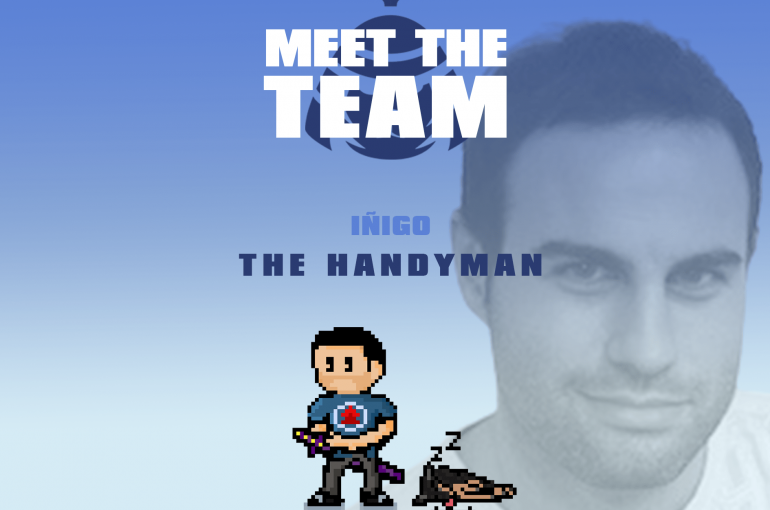 Well, there were some big news in Roninpixels the last days, but it is time to talk about myself, so here I am.

But who is Iñigo?

I was born and raised in Bilbao (Spain) and I’m a person who from childhood enjoyed what commonly is known in Spanish as “cacharreando“ (fiddling with). I loved building legos or Playmobils, working with wood etc. And when I got my first computer I got the same attitude with it, getting deeper on how it worked and learning how to develop (when I was 14 I got my first Visual Basic programming book).

Now I love doing sport (CrossFit, biking and snowboarding) and playing video games. As you may guess, I also keep “cacharreando” with my bikes 😌

I have been lucky during my professional career, as I’ve been able to work in completely different areas, learning many things that helped to define my path as a Ronin.

The beginning, finding my way

I started working on a small company called Andago doing R&D in health projects. I remember working with GWT, developing Javascript code written in Java, and that was my first contact with Web Development. At this moment, I started to like what I could do, for me was something completely new, since in the University I just developed desktop apps.

After that, I went to Tapquo, a startup where I was partner and where I worked on different projects – mostly doing consultancy and learning a bit about management too.

Going on my own, trying to be a Ronin?

Then, I became a freelance consultant and worked mostly on mobile apps. Flying alone, I had to deal with many things like finding customers, define products, develop, etc. I would say that this experience was one of the hardest as I was just a kid in this technical world, but also gave me the maturity that I was going to need in the future.

Where would you say that everything started?

Small decisions may end on big things, and a small step can be the beginning of the path of the Ronin

After a while as a freelancer, I took the decision of becoming employee at Schneider Electric, migrating a traffic platform to HTML 5. There I met Juan who after a couple of months left and went to work with Gorka Puente on his Start-up Keinoby.

A couple of months later, I left to work at Ikergune. I started developing a platform based on FIWARE technology, making robots to communicate and collaborate to achieve goals. During this time I met Gorka and Juan in a Codemotion, and Gorka tried to hire me for first time but he had no luck

The time went by, and one day Juan called me to tell me that he was working at Comalatech with Gorka and if I wanted to join. Spoiler alert: I joined (Gorka probably opened lots of cava bottles to celebrate it) and I learned a lot about the Atlassian cloud platform. I started working on some of their products until I became the Cloud Team Lead. There, I met Francisco Javier Coira too, but we were on different teams so we didn’t talk too much.

As on many journeys, bumps may appear

Javi was the first one who left Comalatech as he moved abroad. Some years later, Gorka and I also realised that things were not as expected, that we needed something else, so we left Comalatech doing our paths separately. He went to Manfred (where later Javi joined too) as Product Manager and I became the CTO of Globatalent (a Start-up that uses blockchain to fund athletes).

About a year later after leaving Comalatech we built RoninPixels and here are we, working hard to bring users the best dashboards we can!

If you have read until here you will probably have reached to the conclusion that this path was a bit chaotic.

But hey! we are here to have fun!