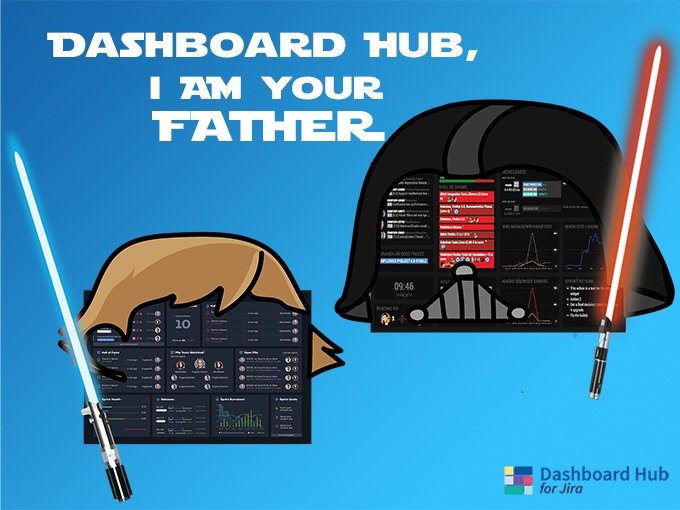 “Somewhere in La Mancha, in a place whose name I do not care to remember…” Wow, hold on those long stories Cervantes! Let us better quickly tell you the interesting story of Dashboard Hub 📜

💡 Every single product out there has a foundation, an inspiration, to serve as a starting point. It can be previous works, gazed with admiration. Dashboard Hub is no different, let us show you what inspired us to work on the amazing world of charts, metrics, reports and dashboards.

You don’t know what is Dashboard Hub? Check out how to create and share dashboards in less than a minute!

For this article, we carried on an exciting interview the 07 Sept 2021 to Iván Loire. Iván has been a software developer in Atlassian for 6,5 years. He has been working in Confluence and Trello mainly, being one of the first Spaniards who joined the Atlassian Sydney office in 2012.

Atlasboard: Simple and beautiful wallboards for everyone

The very first version of Atlasboard was delivered by William Archinal and Chris Kiehl in a ShipIt in 2013. ShipIt was an internal hackathon to develop proyects in a single day. As they say: “24 hours to innovate. It’s like 20% time. On steroids”. That is how Atlasboard was born in less than 24h! But what was that first idea of Atlasboard?

“A dashboard framework written in NodeJS”. That is the concept Iván was told about this project in an internal presentation. And he needed to hear no more. He found this project particularly interesting, he could learn more about NodeJS at the same time that improving the way his team worked, it was a no-brainer. Iván became the internal ambassador of the project.

When Iván took the project, it was technically in an early stage. So, during two years, Iván contributed to Atlasboard ceaselessly. Nonstop. The effort was proven worthy when Atlasboard was seen displayed in screens throughout offices around the world: Sydney, Vietnam, Austin, San Francisco… Internal teams within Atlassian started to love it. They could access to their relevant information at a glance!

Atlasboard’s hook was its customization possibilities. Anyone with technical knowledge had the power of implementing whichever “widget” and specific dashboard they felt in need of. Employees, users, and even customers could inmediately know the status of a project, product or builds. Curious about how these dashboards worked? Explore the #atlasboard hashtag in Twitter or check out one of the tutorials that Iván uploaded at that time –  like Atlasboard – creating the first widget and job.

What problems did it solve?

“At that time, in the Confluence team we had between 50 and 100 builds, and when one of those builds failed, it was a problem for the whole team, so we needed a quick way to put that in front of everyone” mentions Iván. By using Atlasboard with its widgets, users started to easily see the workload of their colleagues by number of assigned pull requests.

Iván joyful reckons the “Hall of Shame”. This widget showed the face of the person who was the responsible of a broken build, which every single employee avoided to be! Iván has good memories with the fun moments that usually ocurred when someone appeared in the Hall of Shame.

What happened with it?

So… If Atlasboard was this great, what happened to it and why didn’t the project receive more support? Atlasboard has not fully dissapeared, as there is still people providing some updates… But the initial momentum was lost. Well, we all know Atlassian and its culture of collaboration and contribution. They wouldn’t be able to fully abandon a project like this. But ever since Iván moved back to Europe, nobody took over his legacy after him.

Iván has certainly a very interesting professional career. After working on Atlasboard for years, he has grown a sincere interest towards visualizations and communicating valuable information. With those ideas in mind, Iván trusts in dashboards as one of the greatest ways to express and transmit this information. In his opinion, the most important element is the usability of the gadgets. Dashboards, and more concretely gadgets, must provide value to the audience. Visual metaphors, specific layouts, a palette of colors that allow users to be really meaning and appealing… And we were very happy to hear that Iván sees those characteristics in some of our gadgets, although he also admits not being a hard user of the app (yet) 😉.

We are excited to see how Dashboard Hub‘s potential increasingly has more value to give to our awesome users. We’ll never stop working until Iván becomes our top fan. We’ll keep provoking him with our new gadgets 😎

What do Marketplace vendors think about Dashboard Hub?

P.S.: Dashboard Hub indeed counts with the above mentioned “Hall of Shame” gadget. But no worries, it also counts with its benign counterpart the “Hall of Fame“. Better get ready!

If you want to leave a review we would be thrilled to read it! You can leave it on the Marketplace or G2.